Logging In From Home

How to log-in to your student's Google account and Clever accounts from home.

Your student's Google account consists of the 9 digit username, always starting with '1000' and followed by a unique 5 digits assigned by the district.  In order to log in from a non-school computer, you will have to include the district's domain in the username.  When put all together in Google's log-in screen, this looks like 1000*****@apps.ogdensd.org 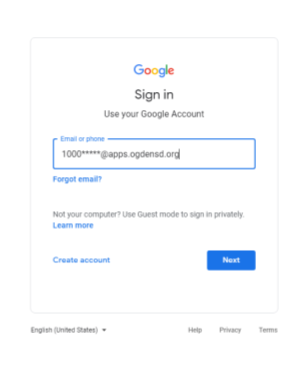 After entering the username and domain, you will be asked for the password.  This password can vary, but for Kindergarten, 4th, 5th, and 6th grades it is most commonly the last 3 letters of the surname, the first two letters of the first name, and the last four digits of their 1000 number.  For example, John Doe would have the password doejo****.

For 1st, 2nd, and 3rd grades the password is most commonly the last initial, first initial, and last four digits of the 1000 number.  In this case, John Doe's password would be dj****. 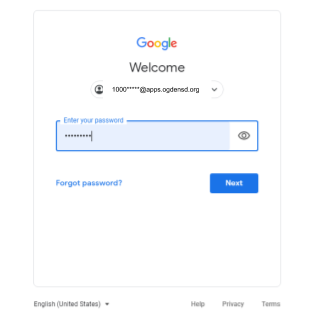 To log in to Clever, the portal we use to access iReady and Lexia Core 5, first go to http://clever.com/in/ogdensd

At the Clever log in screen, once again enter the username in the username field.  On the Clever screen, the district's domain is NOT entered.  The password for Clever, however, is unique.  Instead of the Google password used to log in to their main account, the Clever password is the first three letter of the student's last name, followed by the first two letters of their first name, followed by the last four digits of their username.  For example, the password for a student named John Doe would be doejo****. 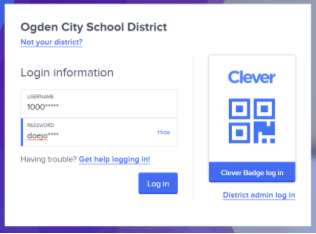